The bespectacled violinist with wavy brown hair had just come from his lab, where he directs the federal government’s research on the human immune system. The bass player used a special tailpiece that he invented to maximize the instrument’s sound. The cellist had finished his day’s work as a computer programmer, still wearing a short-sleeve dress shirt, digital watch and pocket protector.

But the horn player was absent, because his work took him to Canada. Such are the demands of a top neuro-ophthalmologist, a physician who treats brain diseases affecting nerves in the eye socket.

The men and women rehearsing Beethoven at a Rockville church Tuesday night were members of anything but a typical amateur neighborhood orchestra. They are in the National Institutes of Health Philharmonia, a volunteer chamber orchestra of brainy Washington area folks who can lay claim to some of the scientific world’s longest curriculum vitae.

The 59-member group includes some of NIH’s sterling scientists and researchers, medical professionals from other institutions and people with other high-level careers. An attaché at the British Embassy played the horn last season before moving back to England.

“A lot of the people who come are MDs or PhDs or both,” said Martin Brown, a violinist who runs the National Cancer Institute’s health services and economics branch.

“But the funny thing is that when we all get together, we’re just musicians,” said Mike Stein, the computer-programming cellist, who works at Northrop Grumman.

The nexus between the sciences and music is well established. Mathematical minds are said to best understand music, which is analytical and organic.

Prem Subramanian, who plays horn in the NIH orchestra and works as a neuro-ophthalmologist at Johns Hopkins University, likens music to the life sciences.

“You can think of various strings as pulses and processes that are rising and falling,” said Subramanian, 40, a retired Army lieutenant colonel who lives in Silver Spring.

Tonight, the orchestra will give its final performance of the season, playing Beethoven’s Symphony No. 9 at Saint Elizabeth Catholic Church in Rockville. The concert, which will feature the Washington-based Friday Morning Music Club Chorale and four soloists, is free. Donations will go to NIH charities, such as the Children’s Inn at NIH. 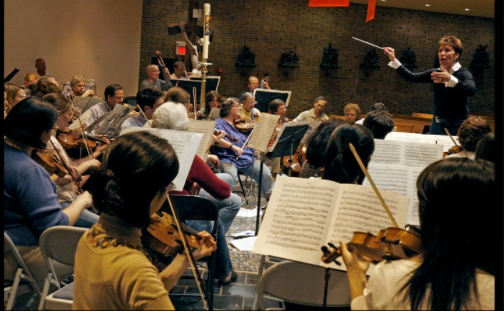 The orchestra is among three dozen clubs that NIH sponsors for employees and students. Others are for fans of country western dancing, kenjutsu (the martial art of the samurai sword) and bowling. The clubs are designed to foster a sense of community at NIH, the federal government’s primary biomedical and health research agency, which employs about 20,000 people, many at its Bethesda campus. Some of the clubs, such as the orchestra, are open to outsiders.

“As youths, a lot of people pick up skills and interests, and we want people to keep those interests lifelong,” said Randy Schools, president of the NIH Recreation and Welfare Association.